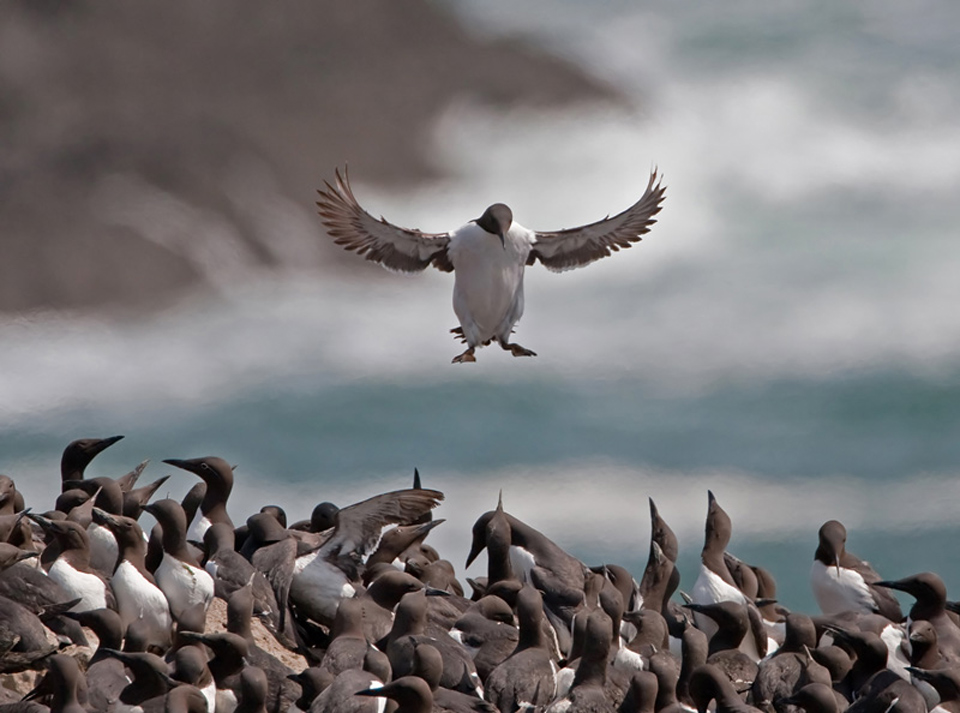 Nestling peacefully in the woods of Cheriton Bottom, Wood Cottage is an all year round haven for any one with an interest in nature, wildlife or archaeology. Adjoining these extensive woods is a 202 hectacre National Nature Reserve and a Site of Special Scientific Interest, jointly managed with the Countryside Council for Wales and the National Trust.

This is an exceptionally biologically rich area containing a wealth of important habitats, species and rare wildlife. The entire area is also designated as an Area of Special Conservation and protected by International Law.

Lying at the heart of the nature reserve, between Broad Haven and Barafundle is Stackpole Warren, an area of coastal grassland and sand dunes that commands considerable archaeological interest. The landscape contains remains of Bronze and Iron Age life dating back at least 3,000 years. Stackpole Warren is on the Register of Landscapes of Special Historic Interest in Wales.

Few all season holiday destinations in Europe embrace this rare variety of habitats and wildlife in such a relatively small area. From the woods of Cheriton Bottom and the shallow freshwater Bosherston lakes to the magnificent limestone cliffs and towering headlands of the National Park coastal path, the air is filled with the buzz of insects, the sound of birds and the sight of wild flowers and fauna.

The woods are home to squirrels, foxes and badgers and an array of bird life which are all frequent visitors to the cottage gardens. You may even be lucky to see an Otter. They have been sighted in the grounds and use the stream, which runs through the garden, as a thoroughfare, from their home in the reed beds and marshes of Caroline Grove a little over half a mile away.

Look and listen out for some of the following most prevalent birds and mammals, depending on the time of year:

A lasting nightime memory of Wood Cottage will be the soothing sound of ‘tu-whit- tu-whoo’, as the male and female owls talk to each other under the star lit night sky. There is a healthy population of the Tawny Owl at Wood Cottage and their calls echo through the wooded valleys surrounding the cottage after dark. Normally these nocturnal birds will lay three or four eggs in a nest in a hole in a tree. Their babies are called owlets and are grey downy creatures with big round faces and dark eyes like their parents. Adults develop a rich chestnut brown and buff mottling and feed on mice, rabbit and worm. Tawny owls are darker and slightly larger than Barn owls.

Appearing in the sky above the garden at sunset, this is a vulnerable, but the most common specie in Britain. It has a distinctive powerful and straight flight on narrow pointed wings. They fly in the open, often well above treetop level with repeated steep dives when chasing insects at up to 50 kph (30mph). They forage mainly at dusk for up to 2 hours and for about half an hour at dawn. They are selective about their tree hole roosts, preferring large uncluttered woodpecker holes high up in trees in less dense areas of woodland close to the woodland edge.

Robin - A cheery little bird found all year round in Wales, who loves plenty of undergrowth and is great company on walks through the Stackpole Estate. They will entertain you in the garden by their singing, hopping around and ready acceptance of food from the large patio bird table. Many live for just one year, although their numbers do appear to increase throughout the winter in Stackpole.

The largest of the tit family and a very common visitor to the cottage. They are resident throughout the year, and you will generally see them with other members of the tit family. Great Tits roost in holes and trees and most of their food takes the form of grubs and insects that live in trees, bushes and hedgerows.

An all year round resident of the garden and woods, the Blue Tit is less timid than many other garden birds, and the first to arrive at any new feeder in the garden. They are often found in company with the Great Tit.

Another full time resident of the area. The most common place to see them nesting is in the fork of a tree or a bush. Here they build neat round nests, using moss, lichen, wool, hair and feathers where they produce typically four to six grey eggs tinged with pink and covered in brown blotches. The female is less brightly coloured and often smaller than the male. The main sources of food for chaffinches are buds, berries and seeds. They are frequent guests to the bird table and so tame that they will continue to feed while you enjoy your breakfast on the patio!

In and around the Bosherston Lakes and Lily Ponds

The Earl’s of Cawdor created these lakes between 1790 and 1840 and today are home to otters, waterfowl and dragonflies. The lakes also contain good stocks of coarse fish including pike, tench, roach and perch. In late spring and early summer parts of the Ponds are covered with large white flowers of the white waterlily.

This is an intensely atmospheric environment from which to observe the following birds: 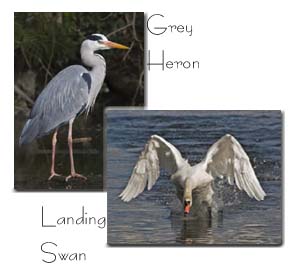 A bird of patience, the lakes offer the perfect habitat for colonies of heron that make their home here. The heron's diet includes fishes, small mammals, young ducks and amphibians - they find frogs particularly easy to catch at mating time. Herons breed in communal nesting sites called heronries. These are collections of nests built of large sticks and usually lodged in the tops of tall trees. Often you will see several heron nests in one tree. Herons will also sometimes nest in the surrounding marsh or nearby cliffs.

Mute swans have a distinctive deep orange bill and make nests of vegetation and down in the reedy margins. Water plants and aquatic insects are the main food of these semi-domesticated swans. In April they produce between five and twelve cygnets and are very good parents.

Large, long-necked black birds that swim low in the water and are able to dive and move about under water with great agility making them excellent at catching fish, on which they feed. Much of the year is spent near the coast but they move inland when the rivers are low in summer and the food there is easy to catch. They are considered a serious predator of trout and coarse fish on still-water fisheries and on some rivers.

A handsome diving duck that uses its long serrated bill to catch fish. A largely freshwater bird, the goosander was bred in the UK in 1871. It built up numbers in Scotland and then since 1970 it has spread across N England and into Wales. Found on the lakes mainly in winter, it moves inland in search of its favourite fish- salmon and trout- throughout the summer.

This is a common, large and heavy looking duck. It has a long body and a long and broad bill. They feed on insects, worms, slugs, snails, frogs and various kinds of shellfish, as well as grasses and other bank-side vegetation. They live on the lakes throughout the year and usually nest on the ground, often in dense undergrowth beside the lake. They will also nest in holes in trees, sometimes well above ground level. Between March and May the female lays between eight and fourteen eggs in a nest of grass and sedge lined with fine down.

A rare bird in Wales, a little smaller than the mallard, and with an obvious black rear end. It is a grey-coloured dabbling duck and shows a white wing patch in flight. When seen close up the grey colour is made up of exquisitely fine barring and speckling. It nests in low numbers in the UK and is endangered specie.

A shy, yet energetic, noisy and pretty little bird with a fluffy and untidy appearance! They nest in the surrounding bushes using moss, wool, feathers and spiders' webs to create a deep dome with a tiny side entrance. In the winter colonies of two or three-dozen can be heard and seen with their disproportionately long white-edged tails working along the edge of a wood, searching for insects.

Its upturned tail and small size are distinctive features, as also is its amazingly loud warble. The male and female are very similar in appearance. Wrens are communal birds, often nesting in groups of eight or ten together. They will make use of nest boxes, but more commonly they nest on scrubby slopes or scree, and in cavities in trees, bridges and walls.

Around the Pembrokeshire Coast National Park

There’s far more birds to look out for in the National Park than we can feature here, but look out for some of the following too:

Plentiful throughout the park, their plaintive mewing cries are somewhat similar to those of a cat. They are resident birds, and so you can see them here all the year round. Buzzards are great gliders. On warm summer days they circle for hours, riding the thermals above forest or moorland. They eat rodents and other small mammals, birds, large insects and reptiles, and are often mobbed by crows and other birds of prey defending the young in their nests against these predators. Buzzards will nest on cliff ledges or in treetops, using sticks, leaves, grass and wool as nesting materials. A brood of two or three young is normal.

Found in healthy communities on the Island of Skomer off the northern coast of Pembrokeshire, the Puffin is the National Park’s marketing identity. These lovely birds are fond of cliffs and boulder-strewn islands with grassy slopes. Their distinctive parrot-like beaks and comical appearance make them very easy to identify as you walk the coastal path.

The oystercatcher is a large, stocky, black and white wading bird. It has a long, orange-red bill and reddish-pink legs. In flight, it shows a wide white wing-stripe, a black tail, and a white rump that extends as a 'V' between the wings. Because it eats cockles, the population is vulnerable if cockle beds are overexploited. Look out for it in Angle Bay where Richard Crossen photographed it coming in to land.

A small, plump, energetic wading bird. It has a short straight black bill and medium length black legs. It is pale grey above and white underneath, and there is a black mark at its shoulder where the folded wing meets the body. It does not breed in the UK, but is a winter visitor and passage migrant in spring and autumn, journeying to and from their high Arctic breeding grounds.

A huge seabird with a wingspan of up to 6 ft. Watch them fly with slow, graceful wing beats and suddenly plunge in spectacular style to seize fish below the surface. At breeding time they gather on rocky islands and rock stacks along the coastline. In March or April, gannets usually lay just one egg in a nest of seaweed and tufts of grass or sea pinks (thrift). They are all year residents to this area.

It flies with a series of rapid stiff-winged flaps followed by long glides on stiff straight wings over the surface of the sea, occasionally banking or 'shearing'. It breeds in colonies in the UK, on offshore islands where it is safe from rats and other ground predators. Birds leave their nest sites in July, to migrate to the coast of South America, where they spend the winter, returning in late February and March. 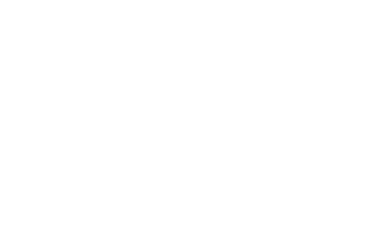